Review of BBC 2 documentary – OCD: a monster in my mind 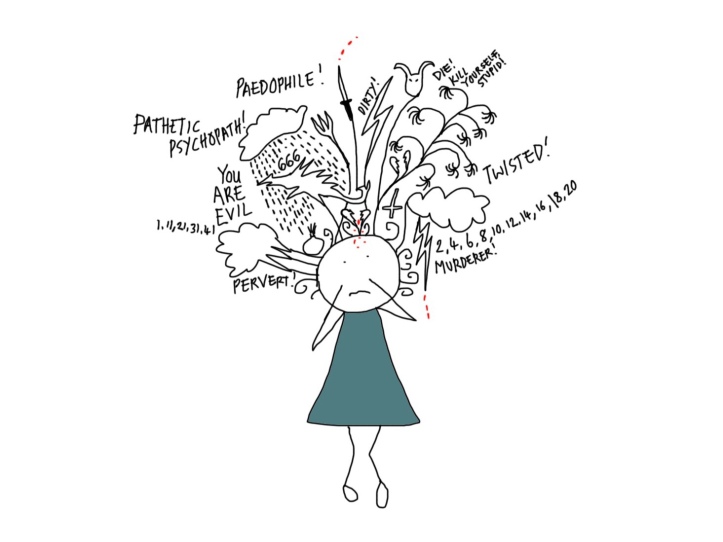 Yesterday I watched a BBC Horizon documentary called OCD: a Monster in my Mind. The program starts with the presenter clearing up popular misconceptions of what OCD is v. what it actually is, which was a good start. It took me a while to warm to her floaty-clothed, dangling-earringed, isn’t-the-human-mind-a-beautiful-thing (actually, no it often isn’t, when you’ve spent the whole day wanting to die because you are trapped in your house unable to leave for fear of getting AIDS) persona, but despite the vague whiffs of happy hippiness, she explored the issue with sensitivity and intelligence and thankfully at no point did she suggest yoga as an alternative to SSRIs.

Anyway, after clearing up some lazy assumptions about OCD (it’s about lining your shoes up, or being excessively tidy; you can be ‘a bit OCD’; it’s a quirky personality trait), the program interviews some genuine OCD sufferers and definitely manages to expose the painful reality of the disorder. There’s Sophie, who has to constantly check that she hasn’t killed people whilst walking down the street. There’s Richard, who says that if he was stronger he would have committed suicide long ago: he demonstrates an abridged version of his OCD rituals whilst making a sandwich, which include washing his hands between every stage of the task to ensure that no possible germs could have contaminated his lunch. Richard then asks for the cameras to be switched off because he has not completed his rituals to satisfaction and he becomes agitated and distressed. His father looks on in worry and despair, and the sandwich goes in the bin. This is the grim reality of life with OCD.

The documentary goes into some detail about the appropriate treatment for OCD sufferers: a type of CBT where patients are gradually exposed to their fears and practise refraining from their compulsions long enough for the anxiety to rise (or ‘spike’, in OCD jargon) and then come down again. One of Sophie’s CBT sessions is captured on camera: she is instructed by her therapist to put a rope round the therapist’s neck and hold it there. The therapist doesn’t seem frightened by this, because Sophie was never going to kill anyone: it’s her brain repeating the fear of doing so, on loop. I once read somewhere that OCD treatment is the only type of therapy that involves giving weapons to the mentally ill. I was deeply impressed by Sophie’s courage to let the cameras in on these most painful and shameful parts of her life. The documentary does well to show viewers exactly what is required to overcome OCD, but doesn’t make enough of the fact that it can take sufferers anywhere between three and twelve months of doing this type of terrifying exposure therapy every single day in order to recover. It’s not a straightforward one-off thing.

Another gap in the discussion is mention of the subtype of OCD known colloquially among sufferers as ‘pure-O’ because it lacks obvious behavioural compulsions. This is what I suffer from, and from the outside nobody can really see that there’s anything wrong. The trouble is, I spend anything between one to ten hours per day ruminating, analysing and checking to prove to myself that my intrusive fears about committing suicide (my current OCD ‘theme’) are unfounded. I perform these mental compulsions whilst having conversations, eating dinner, jogging, rock climbing and brushing my teeth. It would be nice to see the discussion of OCD open up to include these less obvious variants.

The section of the program about current OCD research in neuroscience is fascinating, and shows laboratory mice repeatedly grooming themselves, with electrodes and scary looking sciencey things stuck to their heads. The best part of the program is that there are happy endings, of sorts. Sophie completes her exposure therapy, Richard joins an intensive OCD therapy program, and we are left with hope for a more straightforward ‘cure’ for the disorder in the future advances of neuroscience.

Overall, an exposé well worth watching for sufferers and non-sufferers alike.